skip to main | skip to sidebar

I love the old Addams Family episodes from the 1960s. They're elegant and subversive and – for my money – remain fresh and smart and occasionally laugh-out-loud funny in a way that few shows manage 50 years on. I recently colorized some of the show's opening titles for my own amusement, based on colour set photos and research, for reasons no more sinister than something done in the spirit of fun and to give an approximation of what that remarkable set and cast actually looked like in real life. Since it's attracted a certain amount of online comment – good and bad – I'd thought I'd explain some of the thinking behind it and how it was put together.

Had The Addams Family lasted another year, it would have gone into colour, no question. And, compared to the majority of its 60s TV peers, The Addams Family would have been a very different beast for making the transition. Without a doubt, black and white allowed the Addamses to be zany, yet retain a degree of elegance in their demeanor that belied some of the broader humour. It gave a visually wacky show an air of the sardonic and made what was, literally, a live action cartoon surprisingly graceful and sophisticated. Contrary to popular belief, the Addams house had been designed with colour in mind. For the unaired pilot – a few shots of which were used in the titles – the crew filmed on a re-dressed mansion set built for The Unsinkable Molly Brown. Decorated with bright red wallpaper, this was really the starting point for the show's visuals, and the soundstage built for the show proper at General Service Studios was heavily based on it. For the actual series, the funhouse aspect was ramped up considerably, but not without a degree of good taste. Looking at surviving colour photographs, the clashing wallpapers and bizarre props are outlandish, but display style and harmony, and possibly gave a whole generation a lingering penchant for eclectic interior design in the process. 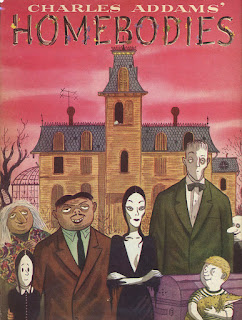 After recently reacquainting myself with Adobe Creative Suite's video software, I thought I'd give colorizing the show's titles a go, having wondered for years how it might look. Throughout, I chose to keep my own creative intrusions to a minimum. Between colour publicity stills, ViewMaster reels and other sources, it's possible to accurately identify the majority of the colours, and I looked at other Filmways TV shows of the same era to see how they approached colour lighting to lend added authenticity. My main liberty taken was on the opening artwork of the mansion – an uncredited piece by Addams creator Charles Addams, fact fans. This had been executed in black and white and would likely have either been redone for a colour switch or replaced by the matte painting of the house used on the show's establishing shots. Since a black and white surround on the shots jarred horribly, I decided to colour it up, basing the design on Charles Addams' occasional colour paintings, taking the pink sky from the Homebodies cover, the Addams book of cartoons that inspired producer David Levy to pitch the TV show. This also had the advantage of reflecting the magentas and jade greens of the living room decor, and – like that set – I used yellow as an accent colour for things like the logo, actor credits and Morticia's roses, based on those distinctive drapes that hung in the doorways. Incidentally, a lot of opticals for early colour shows were done in yellow as it gave an extra colour 'hit' while still registering as white for those still watching in black and white.

The frames themselves were coloured one-by-one in Photoshop, in a process that was predictably labour-intensive and slow to complete. The entire 48-second opening sequence consists of 1409 individual frames and I colorized over 1100 of them. One breakthrough in the execution of the colour itself came when I realised that by aggressively grading shots using the Photoshop curves function, one could take relatively flat, undetailed areas of colour and inject them with a variation of tone which helped make things look much more convincing, particularly on skin tones and highlights. I'd tried this technique before when colorizing single still frames, but here I developed it further, using individual curves for each of the different RGB colour channels, which produced more sophisticated results. Another revelation came from using the master RGB curve on a colour-blend setting, which allowed me to push the intensity of colour across different areas of shading without altering the tonal range of the underlying black and white image. 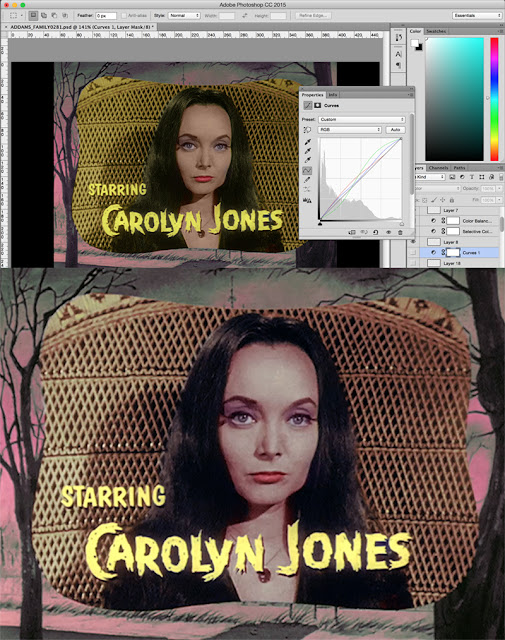 All this helped make the workload much more manageable on a frame-by-frame basis. For example, the grading works well on neutral objects, such as the window frames in the conservatory, which display subtle variations of cream, pink and blue in their shading, but are actually coloured with a simple flat grey wash. I worked on the sequence, off and on, for a month or so in my spare time, and may well tackle the remaining frames some day. I made it midway through the shots of Lurch at the harpsichord and Gomez filing the gates, so an update may follow eventually. 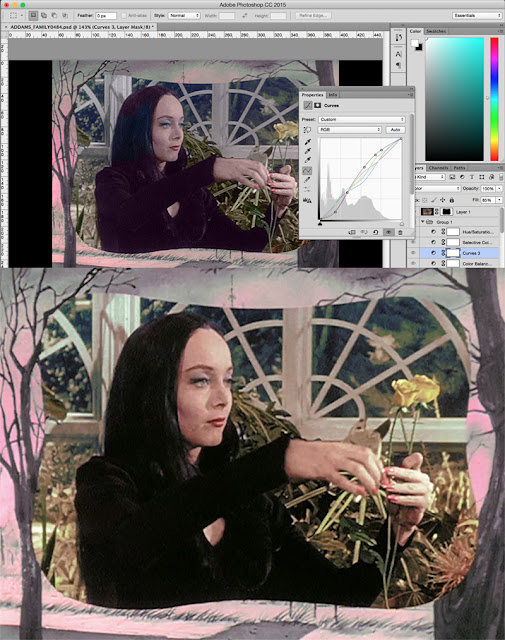 For now, I'm happy for it to stand as a little glimpse of Addams Family in colour and hopefully something that brings the original show to mind with fondness. Put simply, it's a tribute, not a replacement. Having scrutinised the shots to an almost forensic level, I've loved noticing little details like Carolyn Jones' playful little smirk on her second finger snap or John Astin counting down to his cue under his breath for his close-up. The people flicker into life and the shots themselves reveal little surprises, such as Morticia's African strangler lurking in the Kitty shot (yes, Cleopatra really was red), many of which which simply don't register in black and white. I prefer the original too, but I do think it's intriguing – albeit briefly – to see the actors live and breathe without the veil of black and white and glimpse that fabulous set in all its pop art glory. I've tried to do something respectful, authentic and hopefully a little fun too. I hope it's taken in the spirit in which it is intended.

Away from colouring old TV, I work as a designer and illustrator. You can see more of my work on my Facebook and Flickr pages 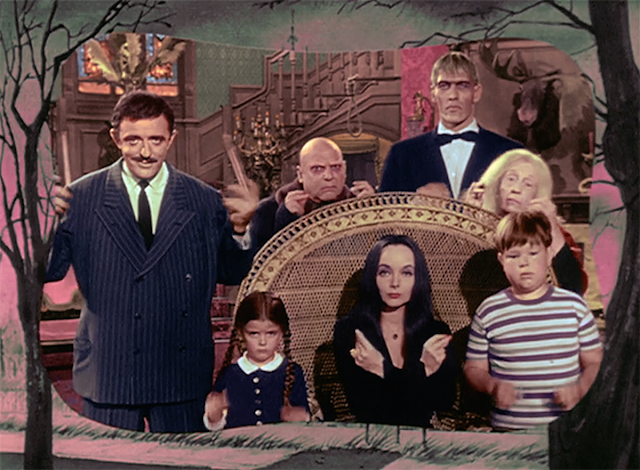 Coloring is actually therapeutic, be it in a hardcopy form or in a digital format. I used to have just the same hobby but after being swamped with work, I just left my previous works in storage for continuation at a much later time. I do take them out sometimes when I have children come over like my nieces and nephews who would often be more than glad to finish the few incomplete pieces.

StuartM
Your guide to the classic soap opera and its movie remake from Johnny Depp and Tim Burton.

I'm the editor of Dark Shadows Journal and have written about the show extensively: